To share your memory on the wall of Eleanor Dalton, sign in using one of the following options:

Receive notifications about information and event scheduling for Eleanor

You will receive any future notification messages.

We encourage you to share your most beloved memories of Eleanor here, so that the family and other loved ones can always see it. You can upload cherished photographs, or share your favorite stories, and can even comment on those shared by others.

Posted Sep 30, 2019 at 07:45am
Eleanor, I am at a loss for words! I will cherish our time together, sharing so many memories, laughs, and secrets! It was an honor and pleasure to return to you the loving care you gave to me as a child. Jerry and I are so happy you are in your heavenly home at last! Love always, Kathleen
Comment Share
Share via: 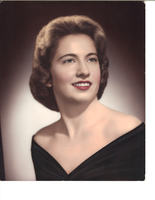