To share your memory on the wall of Frank Wallace, sign in using one of the following options:

Following in the footsteps of his father, uncle and brother, Frank joined the Philadelphia PD in 1959. He rose through the ranks working undercover, uniform, Highway Patrol, and Narcotics, and graduated from the FBI Academy. As a Lieutenant, Frank commanded the Organized Crime Unit at the height of the Philadelphia mob wars. As an inspector, he commanded the North Division. He retired from the Department in 1987.

After retiring from the PD, Frank became Director of Public Safety of Woodbridge, NJ. He then spent close to 30 years as a security consultant, expert witness, and private investigator. Frank had a stellar career and received numerous commendations and awards. He will be dearly missed by the family and friends who knew him and loved him. Frank had a great life and, in his honor, his family will be holding a celebration of his life, which will be announced in the near future.

Frank’s daughter, Mary, would love to know your favorite story about her dad. Please share your story with her directly and/or on the memory wall of this website. Mary can be reached at maryjwallace@gmail.com
www.DiGiacomoFuneralHome.com
Read Less

We encourage you to share your most beloved memories of Frank here, so that the family and other loved ones can always see it. You can upload cherished photographs, or share your favorite stories, and can even comment on those shared by others.

Posted Feb 28, 2020 at 10:34am
Uncle Frankie you were my hero! So handsome, a sharp dresser yet very humble. You will be forever remembered and forever missed. I am so grateful we reconnected this past year and your coming to my birthday celebration and bringing Mary was the highlight of my party! To my beloved Uncle Frankie RIP. To Mary, Frankie, Jean and the Wallace family my deepest condolences. Frankie I know you are in heaven and reunited with your parents, Anthony and my Dad your big brother. Till we meet again .
Comment Share
Share via:
JM

Posted Feb 27, 2020 at 12:30pm
I had the pleasure of knowing Frank since the 1960's. A tremendous guy, I always admired him, all thru his career. Our paths often crossed during various investigations. He was always professional, and very sharp. His outstanding career speaks for itself, because he would never boast of his many accomplishments. Also, proud to know and have worked with his son in the detective bureau, who carries on the family name, which is one of the proudest in the history of the Philadelphia Police Department. During our retirement years we have occasionally run into each other at Wholefoods Markets, and would travel down memory lane. I will miss him! Jack Maxwell
Comment Share
Share via:
VK

So sorry to hear about your loss, Frank was a great guy and a great friend. Please know how much Frank meant to my dad, Jack (John) Lanzidelle), he truly loved him. Frank spoke so eloquently at our Dad's funeral it brought such comfort to all of us to hear the stories Frank had to tell about their experiences on the force. Rest in peace Frank and I hope you have met up with our Dad by now!!! Thoughts and prayers from the Lanzidelle family!!
Comment Share
Share via:
VB

Posted Feb 26, 2020 at 06:18pm
I was saddened to learn of the passing of Frank, I worked with him many years ago in Highway. Most memorable were during the 1964 riots, riding 4 officers to a car, (Sergeant Bobby Miller, Frank, Frank Jackson and myself.). Frank kept us entertained most of the night with war stories and jokes. He always had an upbeat attitude, sense of humor and great working knowledge of law enforcement. He put that knowledge to work by rising through the ranks of the police department. I last saw Frank at our Highway Patrol Ole' timers reunion luncheon at the FOP last year. My condolences to the entire Wallace family, and may Frank rest in peace.
Comment Share
Share via:
AD

Posted Feb 26, 2020 at 06:11pm
To Frankie, Mary, and Jeannie; Please accept my sincerest sympathies on your profound loss. For over forty five years Frank was my hero, mentor, and above all, my good friend. I can truly say that many of my individual successes in life I do attribute mostly to Frank's wisdom, intellect, and friendship. He was the big brother I never had. Frank became the legend he was because of his incredible leadership qualities that many of us will only hope to attain. He welcomed many of my family members and friends into his world. My memories of my Frank were full of joy and laughter, and I will miss them for quite some time. He truly left an indelible mark on my life. Thank you Frank, you have done more for me than you could ever know.
Comment Share
Share via: 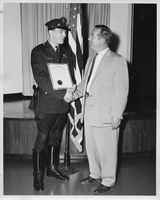